We all know the facelift “look” (or we think we do): The greatly enhanced skin tightness that arises after this procedure can result in an up-swept brow and eye area until the procedure fully settles… A process which can take up to a year. This idea has caused many people to delay getting their first facelift until the visible signs of aging they exhibit become extreme. But, what if everything you thought you knew about facelifts was wrong? What if there was a more subtle option… One that healed more quickly and was effective, while being difficult for others to detect?

Since the advent of the “mini facelift,” we’re happy to say that there is such an option. A mini facelift offers many of the same anti-aging benefits as a full facelift, without requiring extensive incisions. Here’s what you need to know about this convenient procedure:

A full facelift usually targets multiple parts of the patient’s face. In addition to lifting and tightening the jaw and mid-face area, full facelifts also typically lift the brow, eyelids, and neck. All of this is necessary in most patients who are over the age of 60, but some of these steps may not be essential for younger patients. That’s why the mini facelift was developed: During a mini facelift, the length of the incision made is much reduced, minimizing healing time and lowering the risk of complications. Instead of making an incision that extends downward from the temples around the ears, the surgeon will make a short incision around just the back of the earlobe. For this reason, a mini facelift is also referred to as being a “short scar facelift.”

Because only a short incision is used during a mini facelift, this operation can often be performed as an outpatient procedure. Likewise, most patients heal within about one week, as opposed to the two to three week initial healing time required for a full facelift. Swelling, redness, and bruising are also much less evident after a mini facelift.

Rather than tightening the whole face and neck area, a mini facelift specifically targets the parts of the face that are initially the most impacted by aging: The jaw and jowl area and the nasolabial folds. After this surgery, the patient’s jawline will no longer be obscured by sagging skin, the corners of his or her mouth will be lifted, and his or her cheeks will no longer droop. Additionally, smile lines and other wrinkles will be smoothed out. While these changes can obviously make a big difference in how old the patient looks, they will not otherwise dramatically change his or her facial proportions. 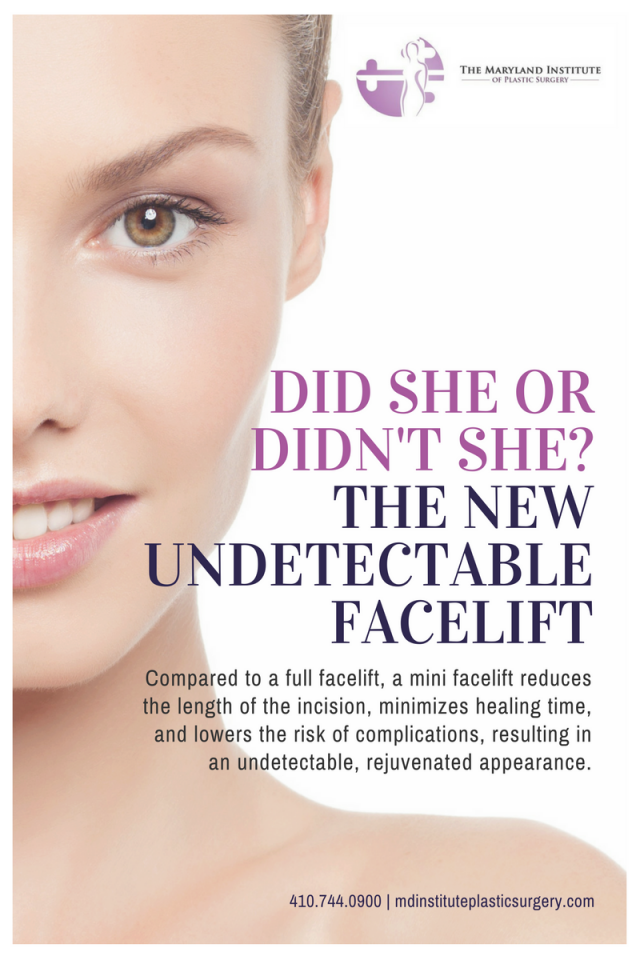 Who is a Good Candidate for a Mini Facelift?

In addition to meeting the above criteria, you will need to be in good overall health (and a non-smoker) in order to have a mini facelift. Remember: While the mini facelift is not an especially intensive procedure, it’s still a form of invasive surgery. As such, common health conditions like type 2 diabetes and cardiovascular disease are still a concern. If you have any current health conditions, talk to your doctor about how to manage them effectively before booking a mini facelift consultation.

Making the Most of Your Mini Facelift

As a final note, it’s important to be aware that the results of mini facelifts can be greatly enhanced with the addition of nonsurgical anti-aging treatments. These treatments are safe, generally affordable, and will not add any additional healing time to your cosmetic restoration schedule.

Injectable fillers (like Juvéderm® and Restylane®) can be used to fill in any wrinkles or areas of poor volume not eradicated by the mini facelift. Likewise, BOTOX® can relax the facial muscles in the forehead, leading to a lack of distracting forehead lines. Finally, chemical peels, laser skin resurfacing, or dermabrasion can be used to remove age spots and fine lines, in addition to causing your skin to regenerate. By combining your mini facelift with these treatments, you can effectively take five or more years off your face—And all without having to endure a lengthy or painful recovery period. For many patients, balancing surgical and nonsurgical treatments in this manner is the ideal compromise.